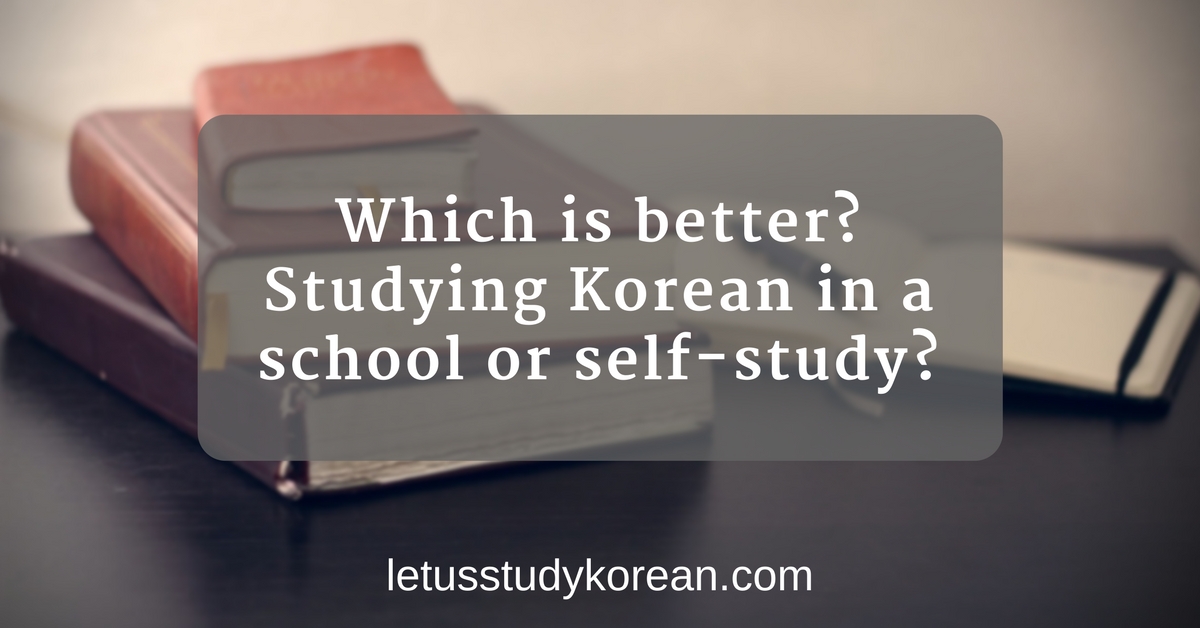 It’s been a looooong time since I’ve written about something that is not a Grammar or Vocabulary entry. So I just thought of writing this short piece about comparing studying Korean in a school and self-studying.

Studying Korean in a school

I’ve been studying Korean at Daehan Korean Language Centre since 2014 August and it’s been working out not too bad for me so far. Studying in a school takes the discipline problem out of the picture. There is actually someone (your teacher) drilling you and making sure that you make progress. Not to mention your teacher could let you know about your proficiency.

Another thing is, the teacher would most probably conduct the class according to a curriculum that the school has arranged. On busy days, you just need to follow along. But if you have extra free time on your hands, you could read up a little ahead of the class. It’s always good to know what to expect in an upcoming class, especially a language class.

Having a teacher is great but it still depends on how proficient (and how enthusiastic) the teacher is in both Korean and English (or any other language for that matter). It’s important to have someone explain everything in your most comfortable language. It’s really painful if your teacher is only proficient in Korean, especially if you’re still studying the fundamentals.

A curriculum is good but some teachers tend to stick to it, which kind of makes the lessons a little dry. You wouldn’t want a teacher who follows the textbook and nothing else, right? In those cases, you might be better off self-studying, gathering questions and then asking the teacher. But from my experience, most Korean teachers are enthusiastic (at least at Daehan) and proficient in both Korean and English.

The biggest takeaway I want to leave you with is to make sure your fundamentals are set well. Which means, when you’re just starting out and do decide to take up classes at a language centre or in a school, your teacher’s capabilities play a huge role. As you advance and move higher, as long as your fundamentals (namely grammar and pronunciation) are strong, you would be able to self-study without many problems. Having a mentor or teacher would still be the best, though!

Before I started studying at Daehan, I was already curious about Hangeul (한글). I mean, most of us started studying Korean because of either KPop or K-Variety, right? Not many Korean learners whom I know actually study Korean just because they are interested in Korea and the language. Admit it, it’s those pretty and handsome idols or funny and charismatic comedians who pulled us!

So… I digressed. Anyway, learning how to read Hangeul before taking classes is highly recommended. It’s not a matter of a head start but rather, think about learning English or any other languages that use alphabets. We started learning alphabets way before we started understanding English, right? It’s the same thing for Korean. At least some basic understanding of Hangeul will greatly benefit new learners.

Starting Korean learning by self-studying is definitely the harder path for anyone. Why? Simply because if we are new to a language, having someone to show us the general direction would surely make things easier. Just think about everything we’ve come across in our lives. Most products we buy come with some sort of manual.

The key thing, though, is that it is essential (and cheaper) for anyone to self-study if becoming fluent and proficient is the goal. But if you’re still at the very basic levels, at least find a mentor to point you in the right direction. There are many online and free resources out there (like LSK! :p) but every single site (including this one) is different from the rest.

So, for the key takeaway, self-study is essential but you need objectives and ways to gauge your progress. Self-study is usually much more effective when you’ve already attained some sort of proficiency to understand basic grammar and know what online resources to help you.

So which one is better?

Some people might disagree with me but I’ll just put out my recommendation. If you’re totally new to Korean, spend a little money and take up basic classes. Expect to pay about S$500-750 for two basic levels. Get the fundamentals ironed out and you’ll save a lot of time. Yes, it’s not cheap. But the amount of time you save is definitely worth it. If you can’t afford it right now, consider working part-time for the cash and just get those basic levels done.

Once you’ve attained some sort of proficiency and remember to ask your teachers about online resources and/or extra notes for grammar, move on to self-study. If you could afford classes, opt for a session (max two) per week so that you have an avenue for your questions. Anything more than two sessions per week (1.5 hour/session) would make you over-reliant on someone.

All in all, classes are a requirement when you’re just starting out but it becomes a good-to-have kind of thing once you’re done with basic grammar, pronunciation and a direction. All the best!

It’s never too late to start. But the time is now.